skip to main | skip to sidebar

My Perception of ‘Swara’ and ‘Sruti’:
Our Own Mystical Past

Background Information
Human ears are sensitive enough to perceive energy vibrations ranging from a few tens of Hertz (i.e. cycles per second) to over ten thousand Hertz, in the form of ‘sound’. In this domain of sound, ‘music’ characterizes its presence in terms of ‘octaves’. As per the ‘A-440: International Standard’, the Middle Octave (most suited for the human voice) ranges from 261.62 Hz to 523.25 Hz. The Octave that lies below this boundary is also popular with the vocal musicians. (This Lower Octave ranges from 130.81 Hz to 261.62 Hz; however, vocalists constrained by limited voice-conditioning, can operate only down to half of this octave length).  Similarly, the octave that is located above the Middle Octave is another region that is patronized extensively by the artists. (This Higher Octave ranges from 523.25 Hz to 1046.5 Hz; even here, vocalists with limited voice conditioning can operate only up to half of this octave length).
Now, please look at the lower and upper edges of an octave; it would be clear that Mother Nature had empowered number ‘2’ as the Master Number (Please recheck the above mathematics! The Middle Octave is ‘twice’ the Lower octave and the Higher octave is twice the Middle octave). This is known as the ‘Arithmetic Division’ and in this manner, mathematics happens to present itself in a ‘friendly’ manner, as we envision ‘octaves’ at the macro plane. However, mathematics becomes not so very friendly, as we attempt to visualize similar divisions at the micro plane, i.e. the spectral spread interior to the octave.
Intra-space within the octave is again influenced by the Master Number ‘2’, but in a ‘complex’ manner! This spectral space is calibrated by a process known as ‘geometric division’ that calls for employment of advanced mathematical tools. Contemporary Western musicology calibrates the intra-octave space by dividing it “geometrically” into 12 equal segments. A single ‘segment’ is designated as ‘100 cents’ and therefore, the octave intra space consists of a sum of 1200 cents.
I wish to share with the viewer, the computational complexity that is involved while determining the size of a single ‘segment’: it is determinable only after evaluating the 12th root of the Master Number ‘2’. (Lot many of us would recall their schooldays experience as to how hard it was to evaluate the square root of ‘2’; it used to be a laborious manual process. However, such tediousness had been surmounted well after the arrival of ‘logarithm’ as a modern mathematical tool; subsequent incorporation of this tool within the calculators and the computers made our life far easier!). This recent advancement of calibrating the octave in terms of ‘cents’ (i.e. 12th root of ‘2’) had received wide acceptability in contemporary Western music as well as with the Eastern musicologists. Even Indian musical tones (which were traditionally described in terms of ‘srutis’) are being described nowadays, in terms of this Western terminology of ‘cents’.
However, let us not forget that this Western concept of calibrating the whole octave in terms of  ‘cents’ is, after all, a recently acquired knowledge, dating back to the 18th Century A.D. Prior to this discovery, musicians were adopting the ancient Greek method of describing the ‘Notes’ in terms of their vibrating lengths: i.e. dividing the lyre string lengths in terms of mathematical ratios such as 2/3, 3/4, and their multiples such as 4/9, 9/16, 16/27, 27/32, 243/256 etc. (‘Note’ is the Western equivalent for what is known as ‘swara’ in Indian musicology); it should be borne in mind that this ancient Greek method of expressing ‘Notes’ as per their ‘fractional’ values, belongs to the relatively lower realm of mathematics, vis-à-vis the modern more advanced mathematical method of expressing in ‘cents’.

Medieval Scenario
Sumerians (4000 B.C.) were highly religious-minded; they worshipped gods in the form of a pantheon of 12 members. What is amazing is the fact that these twelve gods were identified in terms of mathematical fractions: e.g. Anu (60/60 = 1/1), Enlil (50/60 = 5/6), Enki (40/60 = 2/3) and Antu (55/60 = 11/12), Ninlil (45/60 = 3/4), Inanna (15/60 = 1/4), Ninhursag (5/60 = 1/12) and so on. In this manner, the idea of “fractions” seems to have taken deep roots in the Western psyche (even much prior to the arrival of Greeks) and had dominated their music for a long time.
As we turn towards the medieval Indian scenario, what we notice is somewhat awesome! ‘Seven sacred tones’ of music trickled down orally in the form of Holy Sama Veda (3500 B.C.). ‘Sadja-grama’, the earliest musical format that is known to Indian musicologists is believed to be the exact replica of these ‘seven sacred tones’ of Holy Sama Veda. Indian musicology graded the ‘shrillness’ index of these ‘seven sacred tones’, in quantified terms known as ‘srutis’, (quite similar to our contemporary concept of ‘cents’!) in this manner : the Tonic (Sadja = ‘0’ sruti), Rishabha (the Second) = 3 srutis, Gandhara (the Third) = 5 srutis, Madhyama (the Fourth) = 9 srutis, Panchama (the Fifth) = 13 srutis, Dhaivata (the Sixth) = 16 srutis, Nishada (the Seventh) = 18 srutis and the Sadja (octave) = 22 srutis. Please appreciate that the octave was calibrated in terms of 22 srutis.
The viewer is requested to pause here and deliberate on this very sophisticated mathematical ‘concept’ institutionalized into the ancient Indian tradition. Unlike ancient Greeks who divided the octave in terms of ratios based on simple arithmetics, Indians seems to have been far more enlightened while employing the ‘sophisticated’ mathematical concept of calibrating the octave in terms of ‘tonalities’, known as ‘srutis’. It is, however, obvious from the Indian musicological records that the ‘design rationale’ behind this sophisticated mathematical design conceived by their Vedic ancestors had eluded the medieval as well as the contemporary Indian musicologists!
This ‘grey area’ notwithstanding, the strange tradition of ‘srutis’ had trickled down through the ages unhindered and even subsequent musicologists of the stature of Bharata Muni (200 B.C.), Datilla Muni (200 B.C.), Matanga Muni (6th Century A.D.) and Saranga Deva (13th Century A.D.) chose to remain oblivious of this technological sophistication; however, they had no reservations about continuing with the ‘tradition’ in an unquestioning manner and with blind faith. Even as late as 17th Century A.D., Venkatamakhin of Carnatic music traditions chose to retain this age old concept of calibrating the octave in terms of 22 ‘srutis’ (in his 72 Melakarta system of classification) and it forms the very basis for the contemporary traditions of Carnatic music.
We can now discern two distinct streams of musicological concepts flowing along the Western and the Indian routes. The Western stream knew about ‘Notes’ (founded on the simple arithmetics of ‘fractions’) without knowing how to convert them into ‘tones’ (or ‘cents’) within the octave. The Indian stream knew about identities of ‘Notes’ in terms of ‘srutis’ (belonging to the realm of sophisticated mathematics similar to ‘cents’) and yet remained oblivious to the far simpler technique of identification of ‘Notes’ in terms of ‘fractions’ (belonging to the realm of elementary mathematics) (and also they didn’t know how to convert the tonal values into the corresponding fractional values)!

Contemporary Criticism
Having compared the glaring differences between the traditional concepts of ‘sruti’ and ‘swara’, I wish to place before the viewers, a major controversy, raging in the minds of some outstanding Western scholars who had studied our system of music. As per these critics, even the contemporary West (which is technologically far more advanced than the East) could acquire the capability to calibrate the intra-octave space in terms of 1200 cents, barely two centuries back. This musicological capability became feasible only after Chu Tsai Yu (in the year 1584 A.D.) and Simon Steven (1585 A.D.) solved the problem of finding the 12th root of the Master Number ‘2’, as a great ‘mathematical breakthrough’. This was indeed, a great feat involving extraordinary manual exertions, as it was accomplished in the absence of modern mathematical tools like ‘logarithms’. Even this became possible only because ‘12’ happened to be a product of the small prime numbers ‘2’, ‘2’ and ‘3’ and it was relatively easier to process them mathematically further at micro levels.
However, the mathematicians are aware that the ‘challenge-content’ inherent in the Indian design of music while calibrating the octave in terms of 22 equal segments is far more complex! ‘22’ is the product of the prime numbers ‘2’ and ‘11’ in which ‘11’ is a very large prime number and therefore, not amenable to get resolved in terms of further micro level processing. Contemporary mathematical experts contend that without employing mathematical tools such as ‘logarithms’, it is well-nigh impossible to evaluate the 22nd root of the Master Number ‘2’. As per them, granting a capability to the ‘Ancients’ (“primitive” in terms of scientific and technological knowledge base) in evaluating the value of the 22nd root of ‘2’ would amount to gross ‘absurdity’! On the face of it, the criticism by the Western scholars sticks and appears to be rather rational; in case we concede to this apparently logical criticism, all the very idea of ‘22 srutis’ in music would sound totally ‘irrational’, fit to be described only as a ‘myth’!

The Mystic pre-Historic World
I have addressed this Western criticism quite frontally in my Book “The Mystic Citadel of 22 Srutis Music” and have conclusively established in scientific terms that the Indian octave, indeed, had been calibrated in terms of 22 srutis. In addition, I had attempted to establish that 22 distinct ‘tones’ (based on 22 god-fractions of ancient Sumeria) had been, indeed, inserted in this matrix in a skilful manner, by some highly competent designers. The ‘vital inputs’ related to these ‘22-fractions’ and their corresponding ‘tones’, had been passed down to us in theological formats such as the Sumerian pantheon of 12 gods and the ‘seven sacred tones’ of Holy Sama Veda; (presumably, this was done in order to ensure that the posterity continued to pass down these ‘assets’, at least for the fear of God Almighty!)  Our pre-historic glory (i.e. were there some pre-historic civilizations who were far more advanced than us, in science and technology?) is, therefore, extremely mystical; I would request the viewers to peruse my ‘blog’ on ‘gods of Sumeria symbolize our ancient music’ at the link: http://sumeriangods.blogspot.com/ . Also please visit my ‘blog’ at link: http://synopsis-nambirajan.blogspot.com/ (Gives a synopsis of my Book “The Mystic Citadel of 22 Srutis Music”). This would lead you to the other related ‘blogs’ and ‘presentation’ packages that would throw greater light and unravel the mysticism underlying the very concept of ‘22 Srutis Music’.
Contact Me
For more details, contact me on Teles: 91 20 26729256, 9890266845, and 98501 21834. E-mail: snnambirajan@rediffmail.com Please visit my web-site wherein I had given some links that would get you connected to my ‘blogs’ and ‘Presentation Slides’ relevant to the pre-historic music of 22 Srutis: http://www.22sruti.com  I would also request the viewers to peruse my Book: “The Mystic Citadel of 22 Srutis Music” for details (available at my postal address: Srinivasan Nambirajan, A-7/ 103, Florida Estate, Keshav Nagar, Mundhwa, Pune-411036).

Posted by Nambirajan at 7:38 AM

churning the ocean of milk-Vishnu Purana 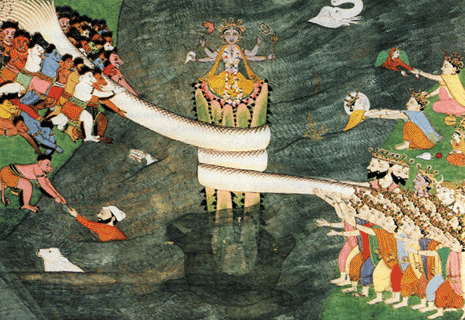